This set of API provides all the necessary functions, allowing acquirers to connect to UPI system with JSON message instead of traditional ISO 8583 message, and supporting UPI QR Code payments in both Merchant-Presented and Consumer-Presented mode.

The platform is open. QR Code can be displayed on merchant's app. The transaction can be completed with any APP that can support UPI's QR Code.

Security is a basic requirement for payments. UPI adopts Tokenization technology which supports risk control for whole transaction process, making sure of safety and preventing leakage of account information.

UPI's QR Code is of EMVCo standard and extendable for future use of compatibility of other international card schemes, which makes QR Code payment in and out of mainland China interoperable.

UPI's QR Code payment sticks to 4-party mode which is almost the same with bank card transaction only except for the information interaction. UPI's QR Code payment has a whole integrated mechanism of business, risk control, techniques which makes user's capital secured.

When to Use it?

Who Use it?
Acquirer, Third-party payment company and Software developer.
Where to Use it?
This API is available globally except for mainland China
Things to Know

6.Acquirer will connect to UPI system which supports single-message transaction only through API.

8.For sample message of each interface, you will find them in each API's sample code column and a package of all sample message in the 'Documentation' column 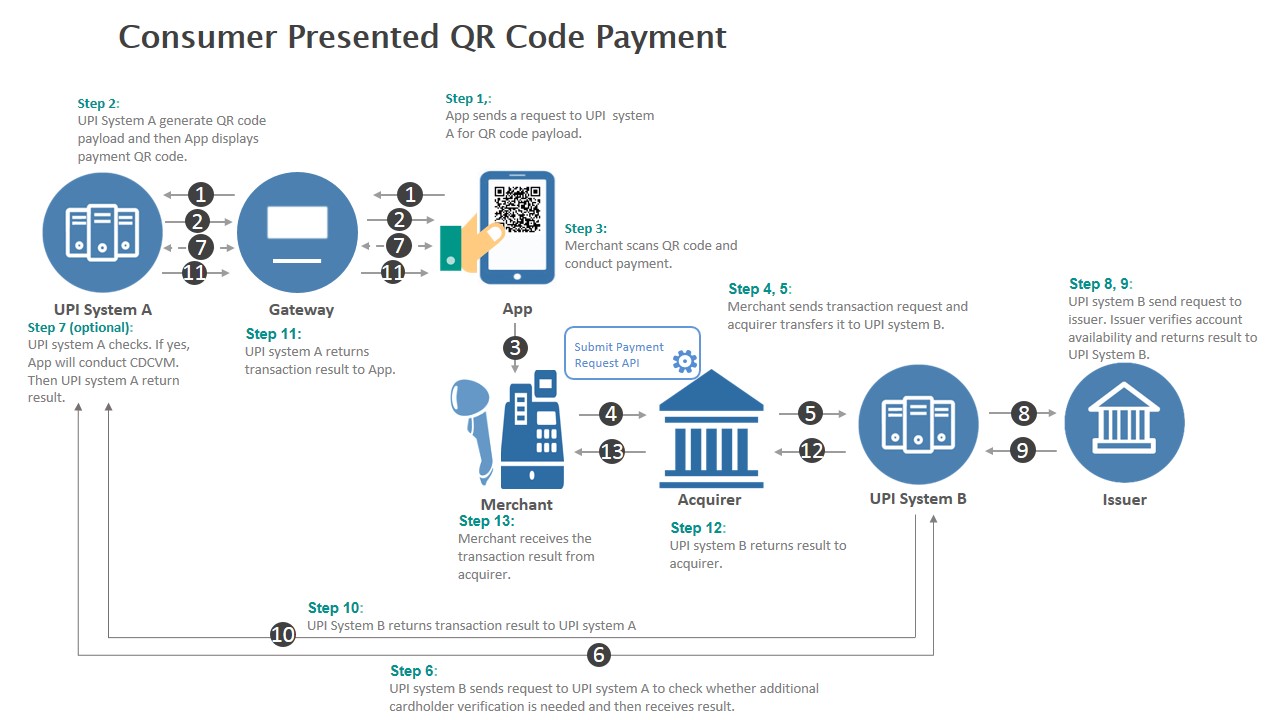 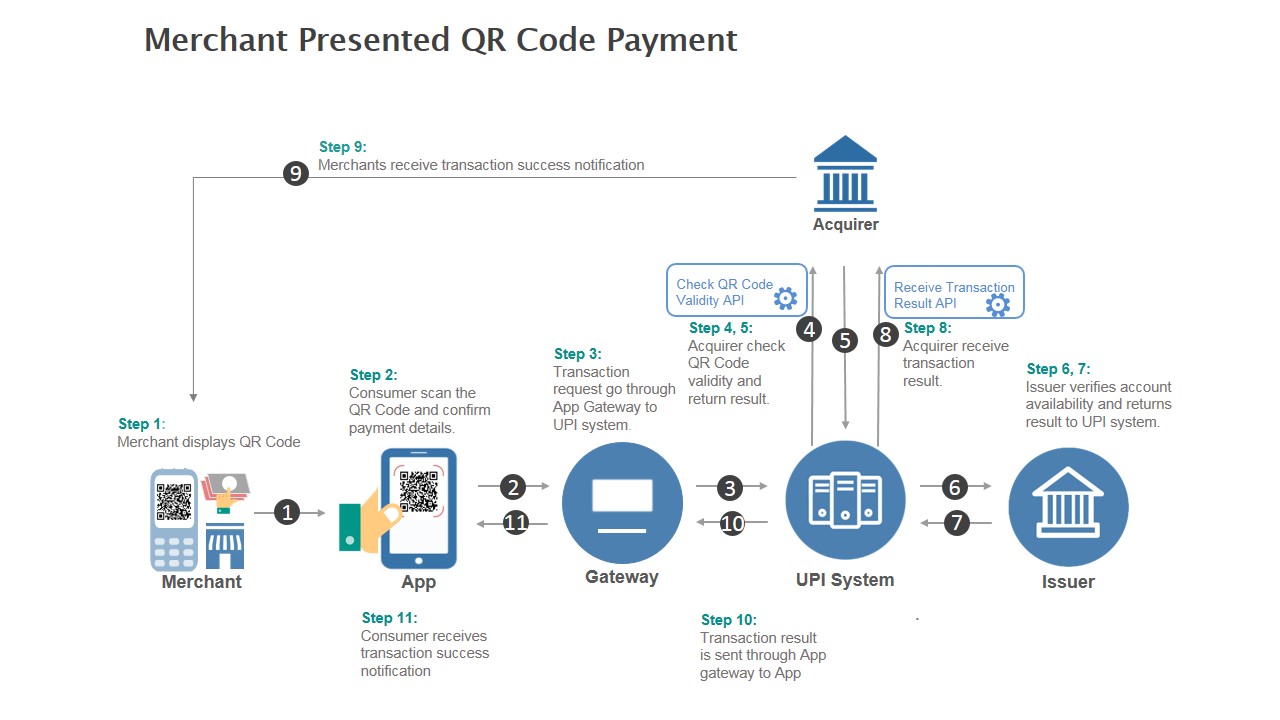 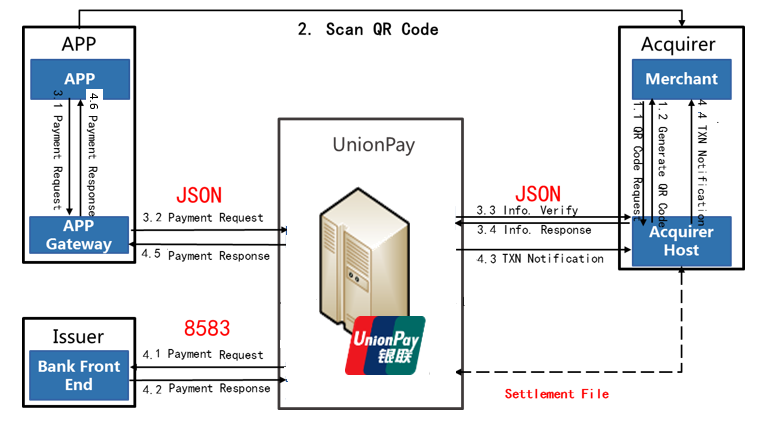 1.Merchant requests an EMV QR Code from the Acquirer.

2.The Acquirer generates the EMV QR Code and returns to the merchant.

Note: the QR code requested by merchants can be either a long-term static QR code or a one-time dynamic QR code.

6.The Acquirer checks the validity of the merchant information. If merchant info. IS valid, the Acquiring system will return a payment reponse to UnionPay System and confirm the transaction.

7.UnionPay System transfers the payment request (including QRC voucher number) and sends to the Issuer for authorization and obtain the corresponding payment response. 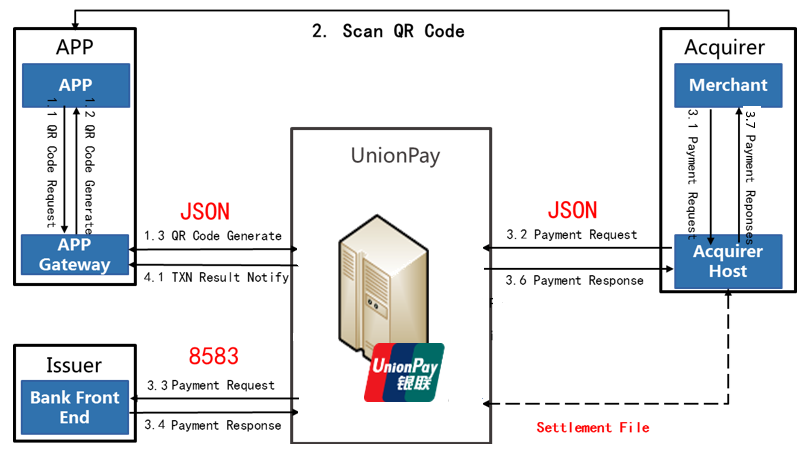 1.Cardholder requests an EMV QR Code from UnionPay System and displays the QR Code with App.

5.After receiving the success response, UnionPay system returns a purchase response to the Acquirer (may choose to return the QRC payment voucher number  (F125) according to the situation of the acquirer);

7.The transaction is successfully completed and the merchant prints the transaction receipt according to the cardholder's request, signature will not be required.

1.When Acquirer does not receive the PURCHASE response message within 45 seconds, it can initiate a message result inquiry, using the Message ID of the PUECHASE massage to check if the payment is successful.

2.UnionPay System will return the PURCHASE transaction outcome (approved/rejected/pending) and settlement information to the Acquirer. 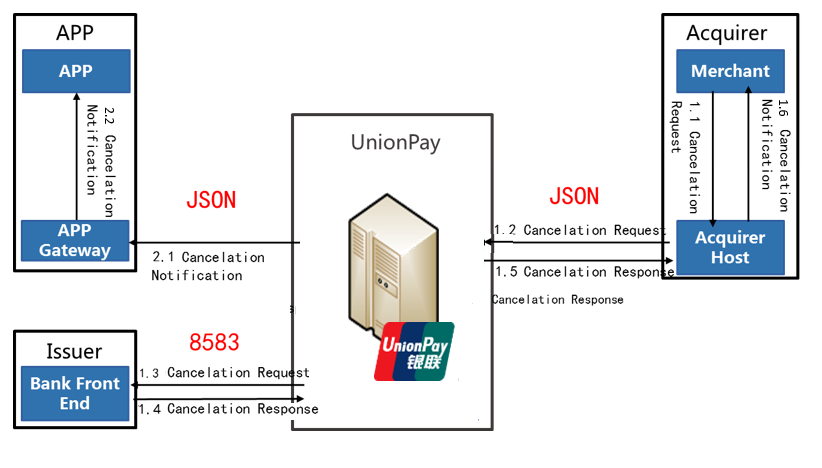 1.Merchant initiates a CANCELATION request to the Acquirer through using the QRC voucher number.

2.Under Merchant-Presented Mode, the Acquirer matches the transaction according to QRC voucher number and initiates an cancelation request to UnionPay System;

Under Consumer-Presented Mode, the Acquirer uses the Message ID of PURCHASE to void the consumer-presented QRC purchase.

3.UnionPay System sends the canelation request to the Issuer.

4.The Issuer sends the cancelation response to UnionPay System.

6.UnionPay System sends the CANCELATION notification to the App through App Gateway. 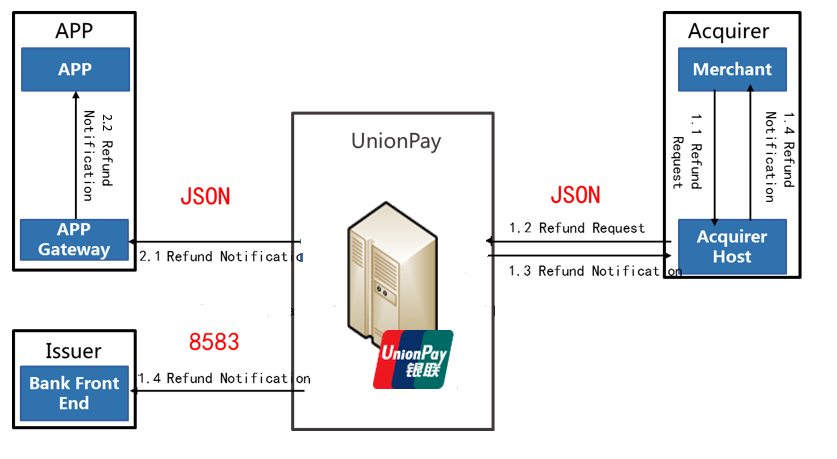 1.Merchant initiates a REFUND notification to the Acquirer using the QRC voucher number.

2.The Acquirer matches the transaction with the QRC voucher number and submits a refund request to UnionPay System.

3.UnionPay System immediately responds to the Acquirer with a refund response, and the Acquirer sends the refund notification to merchants.

4.UnionPay System sends a refund notification to the Issuer.

Signature is used to validate the integrity and authenticity of the message. The Acquirer shall follow the steps below to generate a signature or verify the signature:

1.To-Be-Signed String: Prepare the message to be sent to the UAIS system in the JSON format. Fill the “signature” with “00000000”. Messages shall contain no white space between fields.

2.Use the SHA256WithRSA algorithm and the private key of Acquirer Signature Certificate to calculate the signature from the To-Be-Signed String.

3.Base64 encode the signature from step 2 and put it as the value of “signature”. The Base64 encoding and decoding are defined in [RFC 4648].

To verify a message:

1.To-Be-Signed String: Prepare the message received from the UAIS system in the JSON format. Fill the “signature” with “00000000”. Messages shall contain no white space between fields.

2.Base64 decode the value of “signature” to get the signature from the sender.

3.Use the SHA256WithRSA algorithm and the public key of UAIS Signature Certificate with the To-Be-Signed String to verify the signature.

For sensitive information such as Cardholder Verification Information (“cvmInfo”), Primary Account Number (“pan”), etc., the UAIS requires to encrypt its value before transmitting it in the message. The Acquirer shall follow the steps below:

To encrypt a data element:

1.Use the public key of UAIS Encryption Certificate and encrypt a data element with RSA (PKCS1_PADDING) algorithm.

2.Base64 encode the encrypted result and fill it in the value of the field.

To decrypt a data element:

1.Base64 decode the value of the field.

2.Use the private key of Acquirer Encryption Certificate and decrypt the result of step1 with RSA (PKCS1_PADDING) algorithm.

2.Base64 encode the encrypted result.

3.Fill it in the value of the field.

The QR Code has the same structure as the EMVCo QRC does. 1 Application Template is shown below. 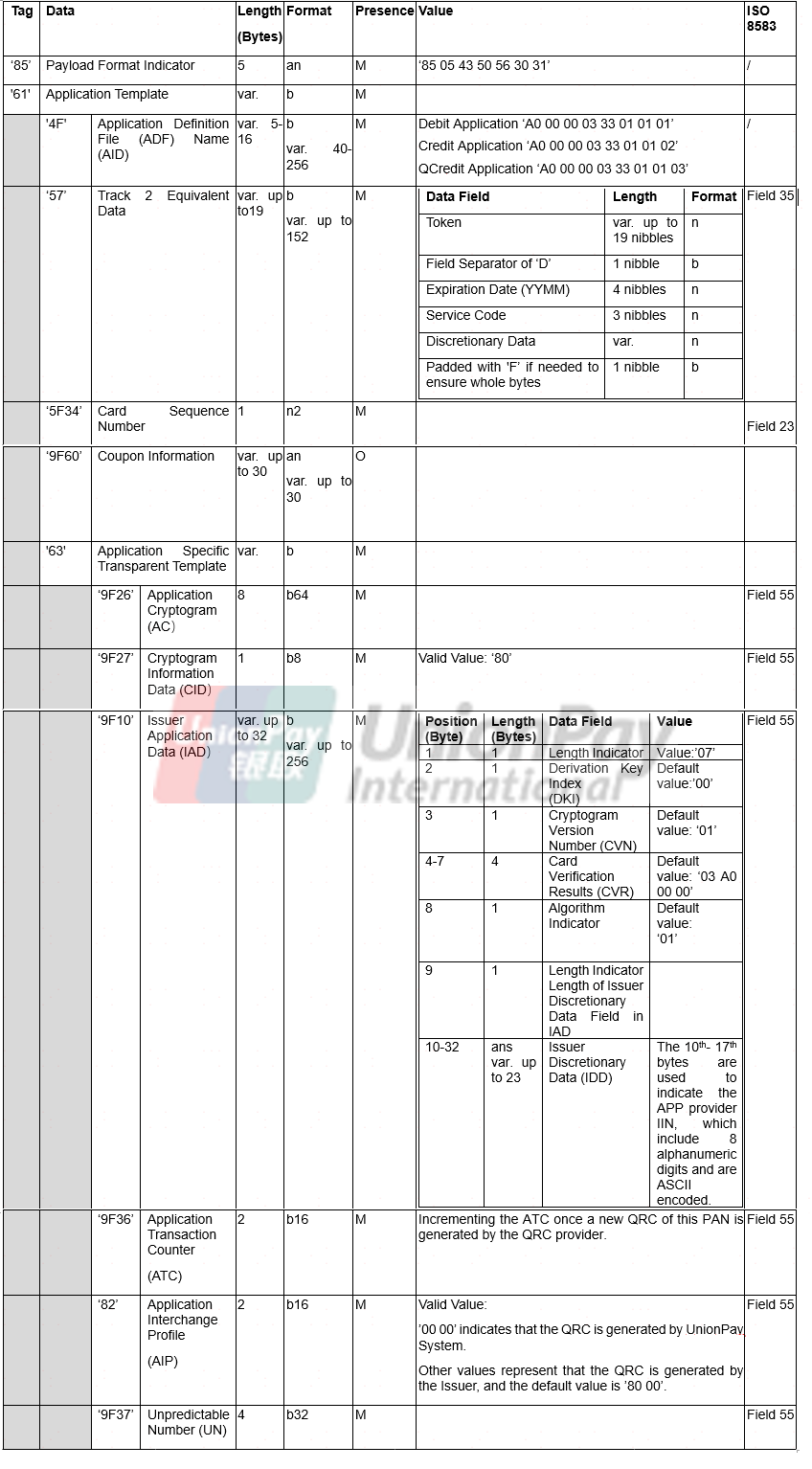 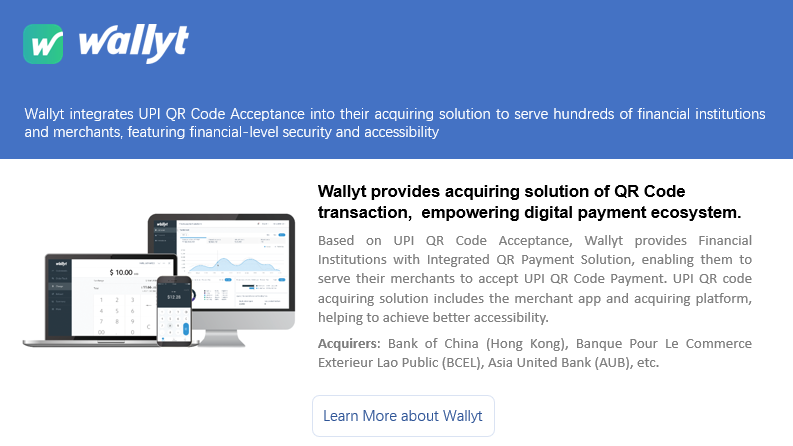 Developers shall check and test if the acquirer system can generate QR Code compliant with UPI Standard, or parse the UPI QR Code from Consumer App.

1) For Merchant-Presented QR Code Acquirer, developers shall test if the QR Code is generated following UPI Technical Specification, and can be scanned and processed by mobile wallet (Consumer App) supported UPI QR Code.

1) The first time exchange shall be operated manually between Developers and UPI Technology specialist considering security.

Note: Developers could use Acquirer IIN 47030344 to test, which does not need signature and encryption process.

2) The Acquirer shall submit a KEY_INQUIRY_EXCHANGE request message to the UAIS system at least once per day.